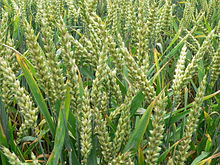 The Punjab Agricultural University, Ludhiana hosted the meeting of the Quinquennial Review Team (QRT) constituted by the Indian Council of Agricultural Research (ICAR) to review the progress of wheat and barley research work carried out by different agricultural universities and research institutes under the “All India Coordinated Wheat & Barley Improvement Project” during the period 2013-18.

Wheat procurement in India is likely to surpass target set for the public distribution system despite crop damage caused by strong wind and rains in the cereal growing belt in North-western region this week.

Reasons for Yellowing of Wheat are Revealed by PAU Experts

Yellowing of wheat may be attributed due to many reasons. Dr O. P. Chaudhary, Head of Dept of Soil Science of Punjab Agricultural University reveal the possible reasons for the yellowing of wheat crop.

The Punjab Agricultural University (PAU) has advised the farmers to remain vigilant and regularly monitor their wheat crop for aphid damage.

Government wheat procurement has gone up by 14%

In the 2017-18 marketing year government's wheat procurement has gone up by 13.74 % to 119 lakh tonnes (LT) on higher purchases from Punjab and Haryana.

The origin of the durum wheats was probably in the region of Abyssinia, whereas the whole group of soft wheat, which includes the bread wheats, probably originated in the region of Pakistan, SouthWestern and the Southern parts of mountainous Bokhara.

Classification of Indian Wheats:
1. Emmer Wheat (Triticum dicoccum schub L.) :
This type was reported to be grown in south i.e. Maharashtra, Tamil Nadu and Karnataka. This type is believed to be developed from T. diccoides koru., a wild form. It is also grown in Spain, Italy, Germany and Russia.

2. Macroni Wheat ( T.durum Desf.) : The durum or macroni wheat, cultivation in India, is considered to be very old. It is a best wheat for drought conditions or under restricted irrigated conditions of Punjab, M.P., Karnataka, Tamil Nadu, Gujarat, West Bengal and H.P. It is used for semolina (suji) preparation.

3. Common Bread Wheat ( T. vulgare Host) :
It is a typical wheat of alluvial soils of Indo-Gangetic plains i.e.Punjab, Uttar Pradesh, Bihar and parts of Rajasthan. The bulk of the Indian crop, therefore, consists of this type.

4. Indian Dwarf Wheat (T.spherococcum Mihi.) :
This belongs to the club wheat of western countries. This is found in limited areas of M.P., U.P., of India and in Pakistan. These are characterised by very short and compact heads having a shorter grains.

5. Triticum aestivum :
This is the type presently grown in India in almost all the wheat growing zones. It is used mainly for bread purpose.

The ideal temperature requirement varies from plant type and stages of growth. The dwarf varieties require the following temperature for their growth and development:

The wheat crop requires a well-pulverized but compact seed bed for good and uniform germination. Three or four ploughings in the summer, repeated harrowing in the rainy season, followed by three or four cultivations and planking immediately before sowing produce a good, firm seed bed for the dry crop on alluvial soils. For the irrigated crop, the land is given a pre-sowing irrigation (palewa or raund) and the number of ploughings is reduced. Where white ants or other pests are a problem, Aldrin 5% or BHC 10% dust at the rate of 25 kg/ha should be applied to the soil after the last ploughing or before planking.

a) Sowing time:
Based on above temperature requirement it has been found that for indigenous wheat last week of October, for long duration dwarf varieties like Kalyansona, Arjun, etc. first fortnight of November and for short duration dwarf wheats like Sonalika, Raj 821 etc. second fortnight is the best sowing time. Under exceptionally late sown condition it may be delayed to latest by 1st week of December beyond which if area is very small transplanting may be practiced.

b) Seed rate:
Generally, a seed rate of 100 kg/ha has been found to be sufficient for most of the varieties like Kalyan Sona, Arjun, Janak, etc.which have moderate tillering and medium sized grains. But a higher seed rate of 125 kg/ha is desirable for late sown wheat and normal sown for varieties like Sonalika, Raj 821 etc. which have bold grains and shy tillering habits.

c) Spacing: :
For irrigated, timely sown wheat, a row spacing of 15 to 22.5 cm is followed, but 22.5 cm between the rows is considered to be the optimum spacing. Under irrigated late-sown conditions, a row spacing of 15-18 cm is the optimum. For dwarf wheats, the planting depth should be between 5 and 6 cm. Planting beyond this depth results in a poor stand. In the case of conventional tall varieties, the depth of sowing may be 8 or 9 cm.

d) Seed treatment:
The seed of loose smut-susceptible varieties should be given solar or hot-water treatment. If the wheat seed is used only for sowing, and not for human consumption or for feeding cattle, it can be treated with Vitavax.

Application of Mannures and Fertilizer

It is desirable that 2 to 3 tonnes of farmyard manure per hectare or some other organic matter is applied 5 or 6 weeks before sowing. The fertilizer requirement of the irrigated wheat crop are as follows:

Generally weeding is done after 1 ½ to 2 months after sowing or weedicides like 2,4 D, Avadex or Nitrofen (Tok E-25) for controling Chenopodium sp, Angallis sp. Asphodelus sp. Phalaris sp. of weeds.

The high yielding wheat varieties should be given five to six irrigations at their critical growth stages viz. Crown root initiation, tillering, jointing, flowering, milk and dough which come at 21-25 days after sowing (DAS), 45-60 DAS, 60-70 DAS, 90-95 DAS, 100-105 DAS and 120-125 DAS respectively. Off these irrigation at CRI stage is most important.

a)Disease control: For controlling diseases following chemicals are used.
Preventive and control measures of the commonly occurring diseases in wheat

a) Harvesting:
The rain-fed crop reaches the harvest stage much earlier than the irrigated crop. The crop is harvested when the grains become hard and the straw becomes dry and brittle.The harvesting is mostly done by sickle. The crop is threshed by treading with cattle on the threshing-flour or by power driven thresher.

b) Yield:
The national average yield of wheat grain is about 12 to 13.8 quintals per hectare.

c) Storage:
The grains should be thoroughly dried before storage. The storage life of the grain is closely related to its moisture content. Grains with less than 10 percent moisture store well. The storage pits, bins or godowns should be moisture-proof and should be fumigated to keep down the stored – grain pests including rats. Zinc phosphide is very effective against rats.